Reviews roundup – Rory Gallagher vs. Dirty Rats vs. In Layman Terms vs. The Gonads vs. Mutant Proof vs. Me Against The World

Another Rory Gallagher compilation, eh? There’s plenty of those on the go and they now well outnumber the 11 studio albums he actually released.

So why buy this one? To be honest I only want it for the 3 Glasgow Apollo tracks from 1982, in decent sound, as it’s a show I was at, being a bit too young for his glory years. For the rest of you there are 3 CDs comprising 36 tracks, 90% of which are unreleased. Which is a bit of a mixed blessing as we’ve already had a BBC sessions CD and an acoustic CD so when some BBC tracks appear and you get an entire acoustic CD you do wonder. The acoustic CD is a one play affair but on the studio disc and the live disc there are some gems which remind you why his name is still revered.

On the “Electric Blues” disc, the unreleased songs from the “Jinx”, “Against The Grain”, “Blueprint”, “Deuce” and “Tattoo” albums are definitely worth hearing although you can tell why they just missed the running order. But you’d be hard pushed to know it’s him playing on the Lonnie Donegan and Muddy Waters album tracks. I’ve never been a fan of his acoustic work but with 12 songs on the “Acoustic Blues” disc there’s plenty for those of you who do.

Finally, it’s the “Live Blues” set and as well as the Glasgow Apollo tracks there are three crackers from the Sheffield City Hall in 1977. ‘Messin’ With The Kid’ and ‘Tore Down’ are just downright brilliant and his playing is on fire. It tails off with a couple of dull guest appearances on live shows with Albert King and Chris Barber before a final (brief) interview segment with the man talking about the blues.

Is it worth the price of admission? I’m not really sure. There are some utterly fantastic performances on offer here but there is also a lot that was unreleased for a reason. Casual listeners and newbies would be better off with a budget best of. Although, strange to say, they all seem to be deleted so you’ll need to go second hand. But for die hard fans and completists, well, it’s pretty much essential. His guitar playing was always otherworldly and is always a delight to revisit. If you’re stuck halfway between “will I / won’t I” then there is a 15 track single CD version also available.

It’s peculiar how yer Australians are the only ones who can pull this sort of rambunctious rock’n’roll off. AC/DC, Rose Tattoo, Airbourne. The Dirty Rats are another brawling bar band who fit right in.

They actually formed back in 1982 and bunged out a few records before winding up at the end of the decade because as the band themselves say “some serious personality clashes (read, lead singer, was a dickhead)”. They had a few reunions over the years but “they all eventually came to a screeching halt as the old issues resurfaced, (Singer was still a dickhead”).

Then come 2013 founding member Jamie Beovich said, enough! Despite death threats from the ex-singer a new singer and drummer are found, and a new guitarist comes on board… twice! (long story). The new version set about some serious touring which saw the “Live At The Bendigo Hotel” CD released and now an actual new album with new songs and everything. And even though it’s never going to change the world the thirty minutes flash by in an enjoyable blur. That’s right, a proper album. NIne songs, thirty minutes, in and out. As it should be.

It’s all chantalong choruses, big riffs, bottles of beer and a damn good night out. The songs are largely irrelevant as it’s all about feel and passion but ‘Rat Town’, ‘Lowlife’ and ‘Notch In Your Belt’ have managed to lodge themselves in my cerebral cortex.

Must be about three years back now when I first heard In Layman Terms. I wasn’t sold on the debut although the original material did show a lot of promise.

Fast forward and they’re all grown up. I say grown up but they were both still in school when the debut was released. This is a definite improvement as they’ve stuck to their own material this time bar a cover of ‘Fever’ and it’s all the better for it.

Brother Cole is a mighty fine guitar player while the bass playing of sister Logan has come on leaps and bounds. They’ve also stepped up their songwriting game and the arrangements are well thought out with brass player and percussionist Hamed Barbarji making some well judged contributions.

The best of the songs can hold their heads up high with the trumpet enhanced ‘I’m Somebody’ and the groove ridden ‘Ain’t Gonna Fake It No More’ absolute standouts.. They’re starting to fulfill their promise and if this record is anything to go by then the blues is there’s for the taking.

I’m old enough to remember The Gonads. Not the first time round, I’m no that decrepit. But first reunion time around. I was very, very drunk. And I suspect, so were they. But it was a fun night out as they were one of the more amusing punkish bands on the go.

They’ve split and reformed countless times over they year but the latest incarnation has sort of held it together for quite some time now. The band themselves say “Their anarchic, highly visual shows appeal to drunks, dossers, loose women, medical students, skinheads, Rastafarians, lap-dancers and the recently deceased.” Which sums up just about everyone I know.

They were lumped in with the Oi! movement back in the day thanks, no doubt, to singer Gal Gonad being an actual inky music journalist who decided to invent his own genre. It included the likes of the Cockney Rejects and the Angelic Upstarts, yer actual working class punk as opposed to the wanky seventies art school variety. It became a tarnished term thanks to the Man and the media concentrating on the handful of fuckwits who appropriated the term for their own ends. Hence the rebranding as “street punk”. But the music was great and The Gonads were up there.

They always had a metal edge to their sound and this album, as the name implies, looks to that side of things. Although quite how the Dr Who theme fits in escapes me. But there is no arguing with the Twisted Sister soundalike ‘Skinhead Girl’ or their tribute to Beki Bondage, um, ‘Beki Bondage Please’. ‘Made In London’ is the most out and out metal tune, sounding like a long lost NWOBHM single. And let’s not forget the live take on ‘Big Balls’, the AC/DC classic. The album is a riot from start to finish although you’d be hard pushed to know it exists from their website. 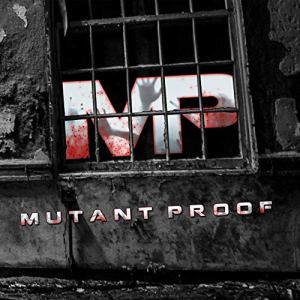 To Germany now for some heavy metal.

And the Germans do like their metal, especially that of the meat and potatoes kind, something that Mutant Proof are happy to dish up.

That’s when Mutant Proof are at their best as displayed on the opening ‘Flames Are Calling’. It’s a cracking slab of trad metal and bodes well for what it to come. They’ve even got a lighters in the air anthem waiting for that festival crowd in the shape of ‘Brave The Storm’. Those songs and a couple of others are the band at their best.

But sometimes they seem to want to be a prog metal band and then things go a bit awry. ‘The Drowned Goddess’ doesn’t work at all and there are a couple of other numbers that fall down the crack. But then the mid section of the album pulls you back in with the slamming delights of ‘Ravished Girl’ and ‘Misery For Free’ grabbing you right where it hurts.

If they can decide who they want to be then they could have a really good album in them. Job half done.

ME AGAINST THE WORLD
Breaking Apart
Fastball

More German metal and another band toying with the edges of prog metal.

I know that bands are desperate not to be pigeonholed but there is something to be said for having an identifiable sound so when you listen to the opening ‘Go Away’ you get all excited with the powerful riffs but then ‘Dead Or Alive’ goes a wee bit punky before ‘Defrauded’ brings you right back to the metal.

By the time you get to ‘Against The World’ you’re checking the tags to make sure it’s the same band while ‘Breaking Apart’ goes all alt-metal. ‘Morgans Misery’ then takes ten minutes to try and convince you they’re a prog metal band and by the end you’re sitting there all confused. Don’t get me wrong. The musicians are great, there are some really good songs and the production is top drawer. But I was left wondering who exactly Me Against The World are.

It’s definitely an interesting album but it’s no easy listening experience. One for those with short attention spans.