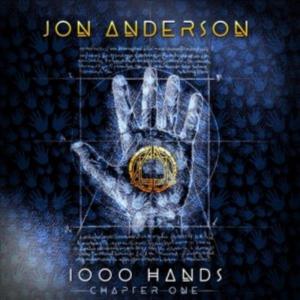 I don’t know but I’m guessing that this is the first CD issue of this, the fifteenth solo album, from Jon Anderson. It was out digitally last year and he even toured in support of it last Autumn.

I’ve always had a soft spot for Jon Anderson. Not just for his music but because he seems to be one of the few musicians who started in the sixties who seems to have hung on to his hippy beliefs. I might disagree with a lot of them but a large round of applause for maintaining them.

As the title indicates there are a lot of weel kent faces (and hands) on this record. Jethro Tull’s Ian Anderson, Journey keyboardist Jonathan Cain, Vanilla Fudge drummer Carmine Appice, Rick Derringer, violinist Jean-Luc Ponty, Billy Cobham and pianist Chick Corea amongst not quite 1000 hands. Even Steve Howe and Alan White pop up. Of course that’s because a lot of the material dates back to recording sessions in 1990 which explains the presence of the late Chris Squire.

That doesn’t matter, though, because it’s a Jon Anderson album and with a couple of exceptions his records could have come out at any point in the last fifty years. So yes there’s prog. But he also continues his investigations of pop, new age and a couple of ill considered turns into reggae and calypso. I think it’s safe to say that ‘Make Me Happy’ won’t be getting played a second time. But when it’s good, it’s really, really good. ‘Ramalama’ has the patented 90125 multi-tracked vocals, ‘First Born Leaders’ is a throwback to his late seventies / early eighties sound. There’s probably too many ballads but ‘Twice in a Lifetime’, the best of them, is definitely worthy of inclusion.

Granted, some of the electronic drums have dated and with an abundance of musical touch ups of the original material it can be tricky to work out who actually plays what. But when you stick your headphones and let ‘Activate’ work its way in, you can only be glad that this record exists. 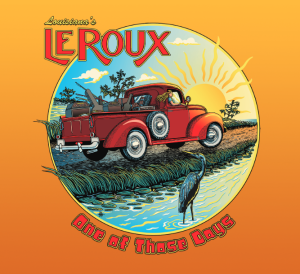 LOUISIANA’S LEROUX
One Of Those Days
independent

Blimey! There’s a blast from the past. I remember about a thousand years ago picking up a copy of their ‘Last Safe Place’ in a bargain bin. Not that it deserved to be there but who, here in the UK, had ever heard of (Louisiana’s) LeRoux.

If anyone over here remembers them it’s probably for one of the later lineups featuring the late Fergie Frederiksen before he headed off to Toto and Survivor. Like a lot of bands of their vintage they split up in the mid eighties before various members put a new lineup together in the late nineties. They’ve been touring in their heartland ever since and put out a couple of records early on this century. But it’s a long time since they’ve been in a recording studio. Based on this, that’s a damn shame. Because it’s really good.

It harks back to their more southern / country roots / bayou than the eighties slicker sound and just oozes class. They’re down to two original members (which is one more than Deep Purple) in Tony Haselden and Rod Roddy although Jim Odom was around in the early eighties. Meanwhile, vocalist Jeff McCarty is probably still a new boy with only ten years under his belt.

Musically, this record is magnificent. There’s not a duff tune nor a bum note. They know how to write a memorable chorus and you’re never more than a two step away from a good melody. The songs are nearly all new originals with a new version of eighties tune “LIfeline” alongside a few covers. Some of the harmony vocals are absolutely delicious but then when you can call up your old buddies Bobby Kimball and Bill Champlain to chip in, there was never going to be any doubt. “Don’t Rescue Me” is one of the main beneficiaries of some outstanding backing vocals soaring behind some gritty, hard guitar lines.

Of the covers, Dustin Ransom’s “No One’s Gonna Love Me (Like The Way You Do),” from his underappreciated ‘Thread On Fire’ EP is a real treat and let’s not forget the down and dirty vibe of “Sauce Piquante”. The record sounds amazing, courtesy of a production from Jeff Glixman whose name graces so many classic LPs (and whom I thought was long retired but who’d opened his own studio in Pennsylvania). A real treat. 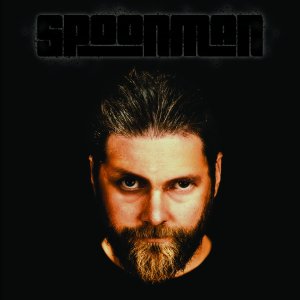 Norwegian hard rock. And if there are three things you can definitely say about SPoonman is that it’s Norwegian, hard and rock.

It’s quite old fashioned sounding. And by that I mean it sounds like nineties post grunge. Which may be connected to the fact that these songs were recorded as demos back in 2004 by Frank sPoon Botten. Then they lay in a drawer until he wheeched them oot, tarted them up and released them as this record.

Mr Botten is quite adamant (hah!) that his nom de guerre is nothing to do with Soundgarden while releasing a record that could easily have been a collection of the third bonus tracks on some 1994 post grunge singles. That’s not to damn them with faint praise, mind, because there is some good music here. The guitars, in particular, are really good. Take a listen to “The Lost Cowboy” and “The Crawling Army” for some fine examples from Ola Langlis.

The problem I have is the vocals. I found them quite one-dimensional. But when you’re the singer, songwriter and the band is named after you, who’s going to tell you.

The record rocks hard, the production is decent enough for an indie release, so you might want to stream a couple of songs to see if the vocals work for you. 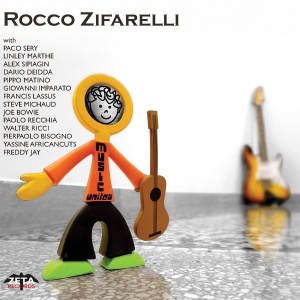 Anyway, Italian guitarist Rocco Zifarelli is a completely different person who has worked with Ennio Morricone over the decades, performing on many a movie score for him. No surprise to learn, then, that when left to his own devices he’s a jazz man. That’s jazz music, no the other kind. Oh, never mind.

So here he is with an encyclopedia of other jazzeteers with a record of near instrumental jazz rock and fusion which details his experiences of musical life in Rome, New York and Paris. And, by jingo, it’s good. Normally the mention of sampling has me reaching for the smelling salts and a stiff malt but this is one of the rare occasions when it actually works. Because in amongst an array of jazz folk you’ll find self described “sound designers” Freddy Jay and Yassin Africancuts whose contribution of samples really works.

Now earlier on you may have caught the phrase “near instrumental”. Well that’s because although there are no vocals as such you will find voices, both natural and treated, being used as instrumentation. Something else that works well. But front and centre you’ll find the incredibly good guitar work of Rocco Zifarelli. It’s unfailingly got the right tone for whatever route he decides to take. It’s a record full of highlights but I keep coming back to “Le Clan Des Siciliens”, one of two Morricone tunes here (three if you count the alternate take bonus track) and the almost acoustic “Ballad for Mr Kromback”.

It’s a remarkable record, all the more so for being an extremely rare solo outing for Zifarelli coming, as it does, a mere 22 years after his last (and first) record, ‘Lyndon’. 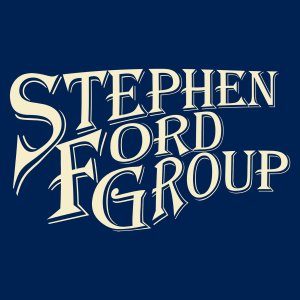 Off to the Canadian colonies now to meet the Stephen Ford Group. Which sounds like somewhere where I would get the Best Deal Ever on my used car.

They’re a wee bit shy when it comes to delivering details about themselves beyond saying this is their debut EP and that they describe themselves as “a rock based fusion band combining ambients sounds with improvisational lead guitar”. Now my bumph translator equates that as “jam band”. But they’re not. Actually, some of the rhythm sounds remind me of Widespread Panic in their more commercial days But with Fred from the B-52s on vocals.

Of the four tracks, ‘Angelina’ is the poppiest, ‘Fire In My Eyes’ has a hint of aggression which serves it well. ‘Young’ is the big ballad and it has some delicious guitar work from Cole Ford. Very Snowy White. I liked that. The closing ‘Path Of The Storm’ is another mellow offering with a plaintive, crying sound that works really well.

It’s an enjoyable EP that will appeal to folk who like their rock a wee bit old fashioned. 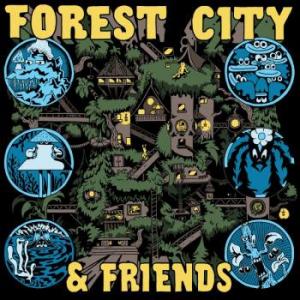 I love press releases. In case you were wondering Forest City & Friends is a super group (their words) while their debut album is a meld of different styles of alternative rock, occasionally slipping into Southern Rock, Beat Jazz and Power Pop. I’m glad they told me that otherwise I would have thought I was listening to some nineties college meets indie rock. At least, that’s what the opening “All Roads” sounds like.

Of course the fact that the three mainstays of the band are nineties indie rockers goes some way to explaining that. However, when they go a bit rootsy they make a really good noise. “Phone Booth” is the best example of that with some lovely harmonies and a great melody. It’s my favourite.

If you are a fan of indie bands from Maine then the & Friends will be of interest to you with members of the likes of Mallett Brothers, Dominic and The Lucid, Lettuce, Rustic Overtones, Heart Shaped Rock and others putting in appearances. But it’s all about the songs, man. And there are some crackers. “It Ain’t Nothin’ New” and “Rainmaker” are both great songs and anytime they whip out a banjo things groove in an upwards direction.

The performances are universally good and by the time they return to their indie roots on the closing “21 Cent Whisper” you’re left with a lot to look back on fondly.